I started a fun project, so I thought I’d share the pain here! The goal is to create a bar-top video game console which runs the MAME emulator and plays thousands of classic video games (like Pac Man, Robotron, Major Havoc, Galaxaga, etc).

A few years ago, I picked up a full-size arcade machine (Solitare actually, but I planned to gut it so I didn’t care what it was), and the guy threw in a small bar-top “shell” with no guts to speak of.  Recently, this project has been bouncing around in my noggin and I decided to do the small one first, as I had an old very small form factor DELL computer which I could hopefully use for the project.

Here are some pictures of the cabinet after cleaning most of the crud off it: 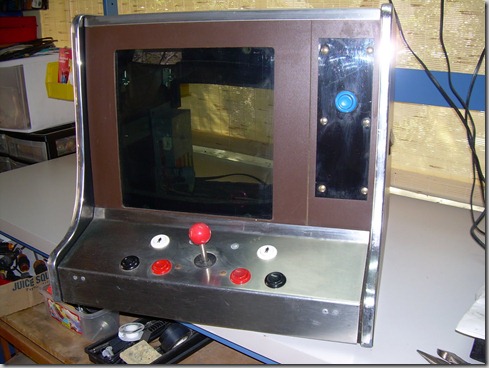 It’s mainly pressboard laminate construction, and some of the pressboard has been damaged by water, so it’s swollen and brittle.  I’ll have to replace those parts, but I want to do a “proof of concept” and make sure everything fits in here that I want to put in, and that it’s usable for friends and family without a degree in computer science.

The top unclips and lifts off, and then the monitor bezel and the piece beside it with the blue “mystery button” on it just lift out. 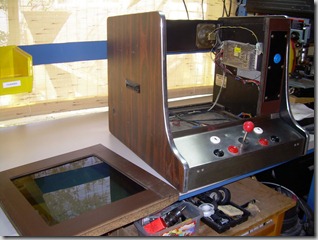 I removed the control panel. It’s held in place with these nifty clips so it just pops out easily.  I am not sure I’ll have room for those clips in my new unit, but we’ll see. 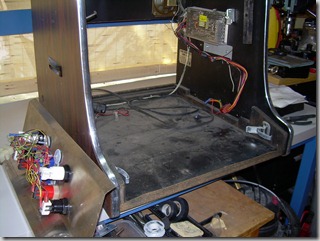 There are a couple of power supplies which I’ll leave for now (probably won’t need them, and I’ll remove them later)

I removed all the old controls from the steel panel, and to the right you see my collection of NEW XArcade parts. 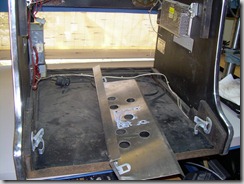 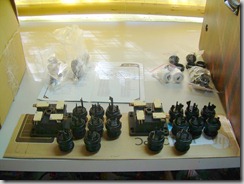 To the right, you can see I am fiddling around with control layouts using a piece of cardboard for my doodling.

Next up: Carving up the old panel to fit my new layout