Once I had the old console disassembled and cleaned up a bit, I needed to figure out a new layout for the controls.  The old console had a single joystick and a couple of buttons (no idea what game it used to play), but I wanted MORE.  I decided to go ahead and put two joysticks and button panels so that two player games could be played, as well as single player games.  Admittedly, you’d probably have to be pretty close friends with the person you are playing 2-up games with, but hey, that’s all part of the fun! 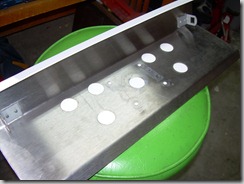 This panel is steel, not aluminum so while it’s nice and rigid for game play, it’s a real pain to work.  Drilling it requires decent (read: expensive) drill bits, Oil, the slowest setting possible on my drill press, and lots of patience.  First I drilled pilot holes for all the buttons and the mounting screw holes for the joysticks (same size drill bit).  The somewhat round circles at the bottom of the picture outline existing holes that I’ll re-use.  The other existing holes in the panel will be ignored for awhile.  They don’t exist.  Work with me on this.

Once the pilot holes were drilled, I enlarged the holes so the bolt from my chassis punch would fit.  Note that I drilled two holes on the front of the panel for the “Pinball flipper” buttons which are used in some games.  Notably, the pinball games.  Believe it or not.

A Chassis punch is absolutely the only way to go for creating large holes in sheet steel like this.  You apply muscle power to it and it bites through leaving a very nice neat hole.  This is a 1 1/8” hole, and it was a bit of a challenge to find a chassis punch that size.  I ended up getting a Greenlee punch for about $50 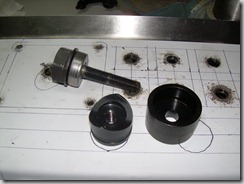 After I was all done punching, I took off the contact paper and washed the whole thing in the sink.  My wife was very understanding and never even gave me a sideways look.  Here’s what the final result looks like.  Again, ignore the extra holes.  I’ll get around to dealing with them later.  Right now, it’s proof-of-concept time.

After a lot of fiddly screwing and tweaking, I got all my new parts installed on the panel:

Unfortunately, even though I tried to leave room on the sides, I was not able to leave enough room, and the nifty clips that held the front panel on just wouldn’t work.  Sigh… oh well, they are history.  I’ll just hold the panel in place with good old fashioned screws.  After all, how often am I going to need to remove the panel and fiddle around underneath?  Probably not all that often. 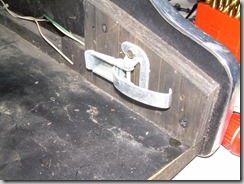 Behind the panel goes this support which the screen bezel sits on.  It’s very tight up against the back of the panel, and my joystick connectors stick out a bit, so I had to notch out a bit of wood to allow for that.  On the right you can see a close up of the piece installed, and the joystick terminals peeking out.

Next up: Wiring the panel